Rome Site Visit Options
The Rome site visit options I offer here are based on my many years of teaching college courses in Rome.  They are intended to offer you an experience of the major sites in Rome's 3,000 years of development as well as the experience of contemporary Italian culture, the people, the food, the piazzas, etc. 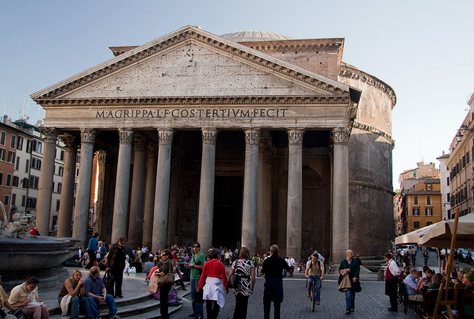 The Pantheon: An architectural marvel from the early 2nd century.
Arrival Day:  Benvenuti a Roma!
Most overnight flights to Rome arrive in the morning or early afternoon.  After taking public transportation from the airport to the Campo de' Fiori, you will still have plenty of time to explore Rome the first day.
After getting settled in your apartment, I would recommend a leisurely lunch at a Campo restaurant such as the Maranega, just outside the apartment entrance, to enjoy the wonderful spectacle of Rome's liveliest piazza.   After lunch, a gelato at the nearby Blue Ice while strolling around the Campo and nearby sites such as Piazza Navona and the Pantheon just a short walk away.  An evening walk after dinner could include the Trevi Fountain and the Spanish Steps, an overlook of the Roman Forum, etc.                 Photo:  "Pantheon panorama, Rome - 4" by Maros M r a z, via Wikimedia Commons. 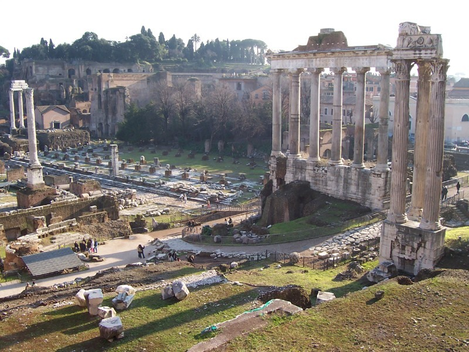 The Roman Forum with the Palatine Hill in the background.
Ancient Rome
From the Campo, you can walk along the route of the triumphal march that honored victorious Roman generals, to explore Rome's origins as a hilltown of primitive huts that became the monumental capital of an empire.

Along the way, you will see the Circus Maximus, the site of Rome's chariot races featured in the movie "Ben Hur."
Nearby is the entrance to the Palatine Hill with the hut of Rome's founders, Romulus and Remus from 753 B.C., the Imperial palace of Augustus, Rome's first emperor, and others, as well as a marvelous overlook of the Roman Forum.From the Palatine Hill, you can walk down into the Roman Forum to see the triumphal arches, Temple of Julius Caesar and the Vestal Virgins, the Curia where the senate met, and the rostra for public speakers.  This sites are usually more than enough for one day.
Photo:  "055ForoRomano" by MarkusMark - via Wikimedia Commons 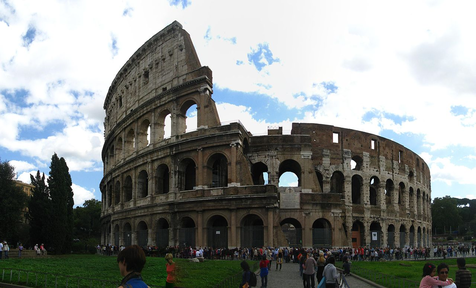 The Colosseum: The site of Rome's gladiatorial spectacles from 80 A.D.
Rome of the Emperors:  The Colosseum
Photo: "Panorama outside of Colosseum" by Jaakko Luttinen, via Wikimedia Commons. 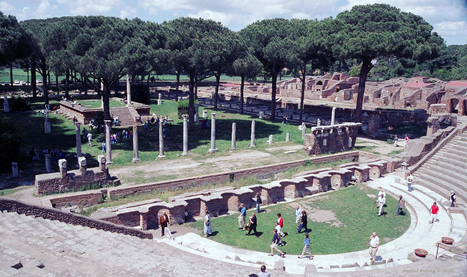 Theater and piazza of the merchants at Ostia Antica by Daniel di Palma.
Ruins of an Imperial Town Just Outside of Rome
A wonderful and relaxing way to experience the aura of Imperial Rome is also through a day trip to Ostia Antica, the ancient seaport of Rome.
Public transportation by bus and train costs only € 1.50 each way which takes you 45 minutes outside of Rome to a relaxed, park-like setting with Roman ruins from the Imperial Age similar to a visit to Pompeii.You will see Roman baths, pagan temples, ancient apartment buildings, a Roman laundry, bar, theater, etc.  Ostia Antica has a cafeteria for food and refreshments, but why not bring some panini from the Campo for an idealic picnic amongst the ruins! 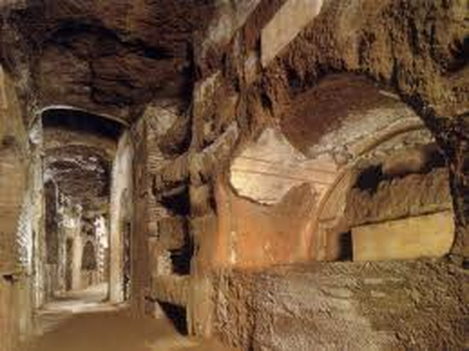 The underground passageways of the Christian Catacombs.
Medieval/Underground Rome
Much of Rome's glorious past, like the Forum, lies well below the present day street level as well as entirely underground because of the sedimentation from frequent flooding of the Tiber River and the legacy of building over previous ruins.
The 12th century Church of San Clemente, for example, is one of the glories of Rome with two underground levels that will take you down in time to the 1st century A.D. where a pagan temple of Mithras, a rival religious cult to Christianity, was uncovered next to a nearby house of the Christian cult.The Catacombs are just a short bus ride outside the walls of Rome, where you will experience the cavelike passageways used for Christian and pagan burials.  Land was expensive and burials were not allowed within the city walls, so they dug them underground out of moist volcanic soil that is easily excavated and then becomes stone-like when exposed to the air.                                     Photo courtesy of Wikipedia 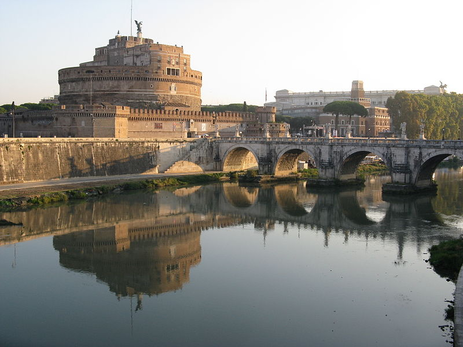 The Castle Sant'Angelo from the Tiber River. Photo by Yair Haklai.
Exploring the Layers of Rome's Historical Development
In Rome, you can also see multiple layers of its history combined above ground in one site, such as the wonderful Castle Sant'Angelo which is within easy walking distance from the Campo.
Originally it was a cylindrical mausoleum for the tomb of the Emperor Hadrian, the builder of the Pantheon, in 139 A.D.
In the Middle Ages, it became a fortress because of its strategic position alongside the Tiber River.During the Renaissance, it was expanded as a castle with a fortified passageway linking it to Saint Peter's that provided a safe refuge for the Popes.  It also served as a prison for the Pope's enemies as featured in the movie "Angels and Demons."
Pope Clement VII escaped here during the Sack of Rome in 1527.  Besides the Pope's apartments, there are marvelous views of the skyline of Rome. 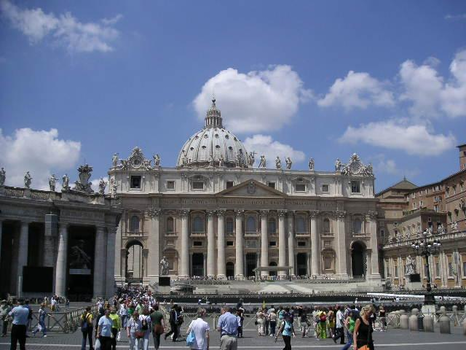 St. Peter's with dome designed by Michelangelo. Photo by Lora Beebe.
The Glory of the Roman Renaissance:  St. Peter's Basilica 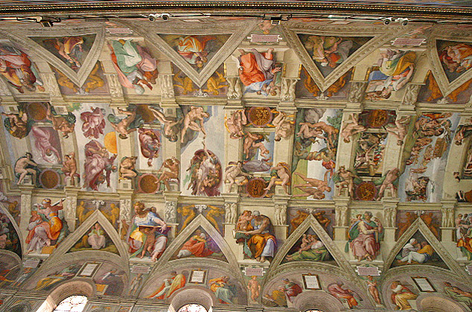 The Sistine Chapel with Michelangelo's frescoes of the Old Testament.
The Artistic Treasures of the Vatican Museum

When I conducted visits to the Vatican Museum with my students, I focused primarily on the Raphael Rooms, the private apartment of the Popes painted by Raphael, and, of course, the Sistine Chapel.  This involves going all the way to the far end of the museum from the entrance, and, just be patient, you may have to wade through a fairly thick crowd.   You will see the Raphael Rooms first, then get routed down some stairs and over to the entrance to the Sistine Chapel (at the left).  It's helpful to try to gradually find a seat on the benches on either side of the Chapel so that you can take in Michelangelo's masterpiece in a more relaxed way.  Afterwards I took my students to the Octagonal Court for the famous sculptures, and then to the Pinacoteca, the art gallery.  That's two hours of intense culture!
Photo: "Lightmatter Sistine Chapel ceiling" via Wikimedia Commons. 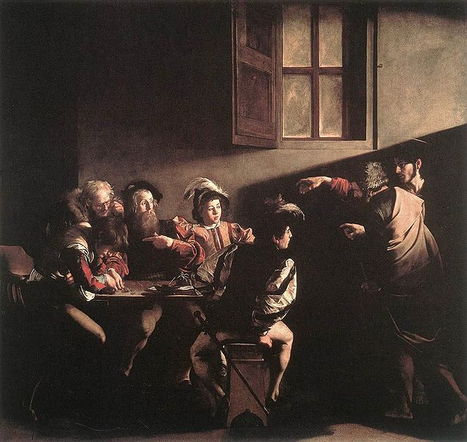 Caravaggio's "The Calling of St. Matthew," from 1599.
Going for Baroque, Rome's Second Renaissance

In 1527, Rome was sacked and nearly destroyed by invading forces, including Protestants, opposed to the Pope.
The Popes survived, however, and reclaimed the glory of the church against the Protestant Reformation through the Counter Reformation which called on artists to engage in dramatic effects to draw back the faithful.  This new style of art, called the Baroque, dominates the look of Rome today.
The painter Caravaggio is one of the geniuses of the Baroque, and his work can be seen, for free, at two churches nearby the Campo. At the Church of Sant'Agostino, you can see the famous "Madonna of Lareto" with Mary depicted like a commoner opening her door to humble peasants, dirty feet and all.  At the Church of San Luigi dei Francesi, close by, you will see "The Calling of Saint Matthew," (at left), "The Inspiration of Saint Matthew," and "The Martyrdom of Saint Matthew" all in one chapel with the dramatic lighting effects typical of the Baroque. 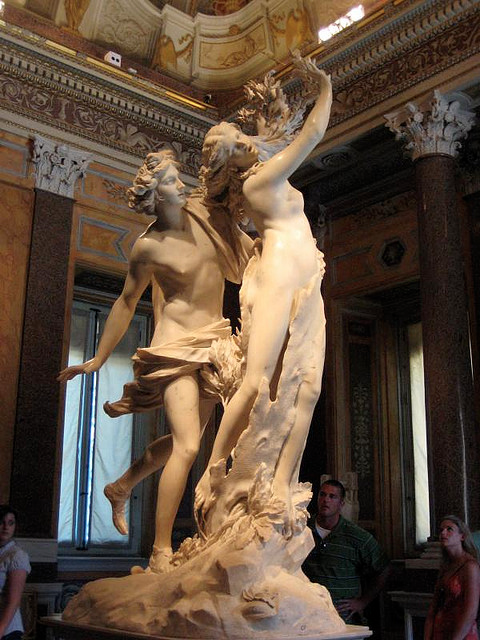 The place to see his most famous works is the Borghese Gallery which is located in one of Rome's most beautiful parks, the Villa Borghese, which is worth a visit on its own.
The Borghese Gallery was the private collection of Cardinal Scipione Borghese, a nephew of Pope Paul V, who used it as a kind of ambassadorial reception hall for visiting dignitaries to overwhelm them with the artistic majesty of the Baroque Papacy.
Scipione was an especially avid and ruthless collector who was known for obtaining works of art through extortion and theft, for example, by stealing Raphael's Deposition of Christ from the grieving mother of a slain son at a private chapel in Perugia.
He was the patron of both Bernini and Caravaggio whose major works are also featured in the collection.
Bernini created works of dynamic movement, like the Apollo and Daphne (left) that went far beyond what anyone had considered possible through sculpture.
The Borghese Gallery is one of the richest collections of art in the world that also includes works by Domenichino, Titian, Rubens, etc.
The best way to get to the Borghese is by taxi. 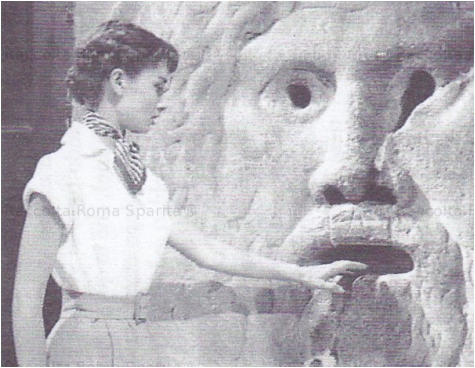 So Much to See in Rome
These Rome site visit options feature prominent sites linked with the major periods in Rome's historical development.
But you might also consider more modern sites, for example,  the huge Vittorio Emanuele Monument, often called the "wedding cake," representing the unification of Italy in the 1860s, and the Fascist Rome of Mussolini at E.U.R., and, of course, Rome's provocative collections of modern art.
There are many other famous tourist sites in Rome such as the Aventine Hill with its beautiful churches, overlook of Rome, and the famous keyhole of the Knights of Malta that perfectly frames a view of St. Peter's.
Or how about Rome of the movies such as "Roman Holiday" (1953) featuring Audrey Hepburn and Gregory Peck at the Boca della Verita (left), the Spanish Steps, the Trevi Fountain, etc. 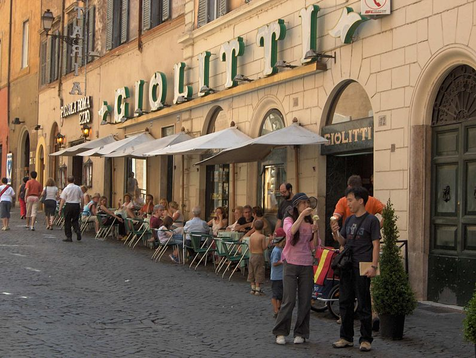 Giolitti, near the Pantheon, is one of the most famous gelaterias in Rome.
Walking Around Rome:  The Passegiata
Photo by Tino Warinowski via Wikimedia Commons.

When to Visit Rome? 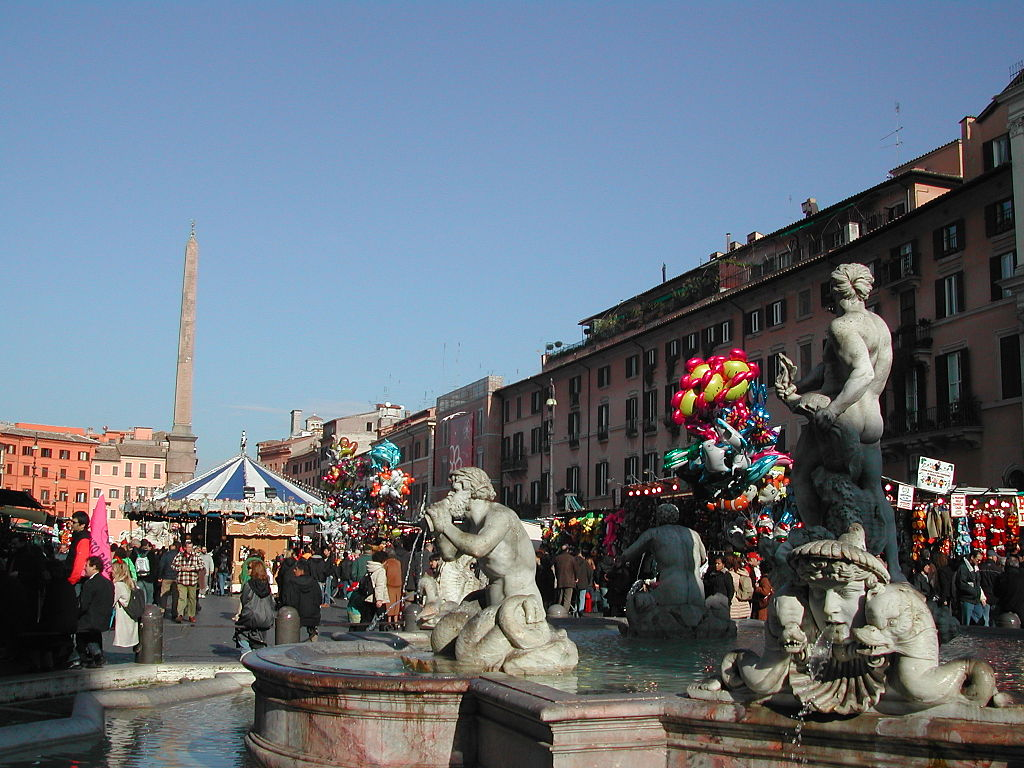 The wonderful Piazza Navona decorated for Christmas.
Photo:  "Parione - NavonaNatale03". via Wikimedia Commons.
Rome in the winter is especially beautiful!  The streets and piazzas are decorated with Christmas lights, and the churches feature colorful displays of the nativity.  Piazza Navona has elaborate nativity scene figures for sale as well as Befana, the Christmas witch, and festive candies, nuts, and panini with porchetta.  Many churches will offer special Christmas concerts.  The weather can be cold but is generally moderate, and tourist sites can be more accessible due to less tourist traffic.  My students always loved their stays in Rome during the winter.

Rome in the Spring 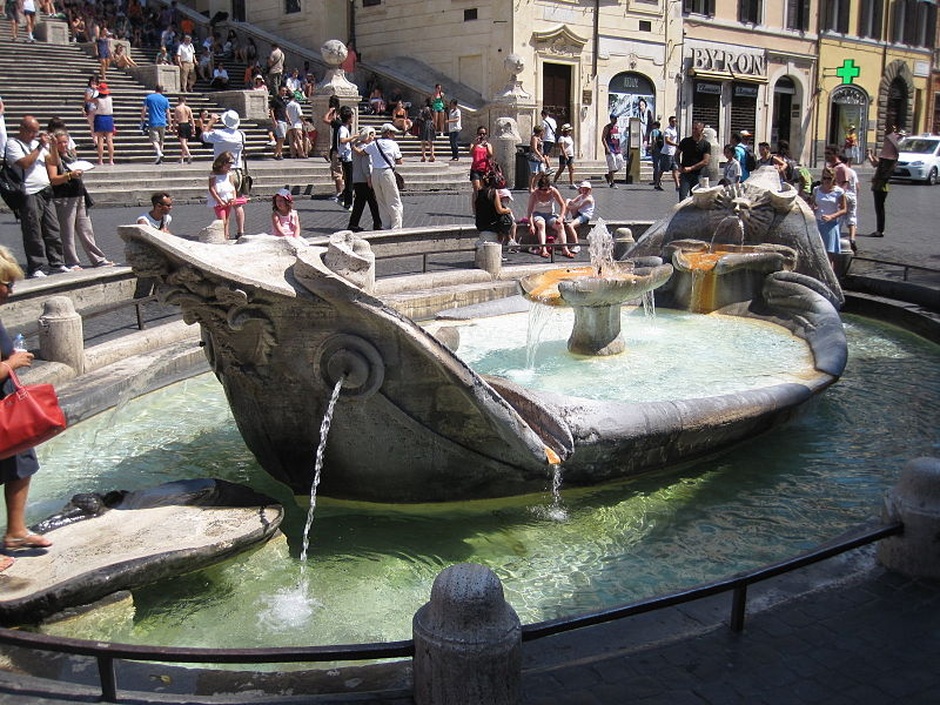 Spring in Rome: The Sinking Ship Fountain at the Spanish Steps with the entrance to the Keats-Shelley Museum in the background.
Photo by Arnaud 25 via Wikimedia Commons.
Spring is an optimal time to visit Rome.  The weather in mid-March is comfortably warm with mixed but usually sunny days.
Rome in the Summer 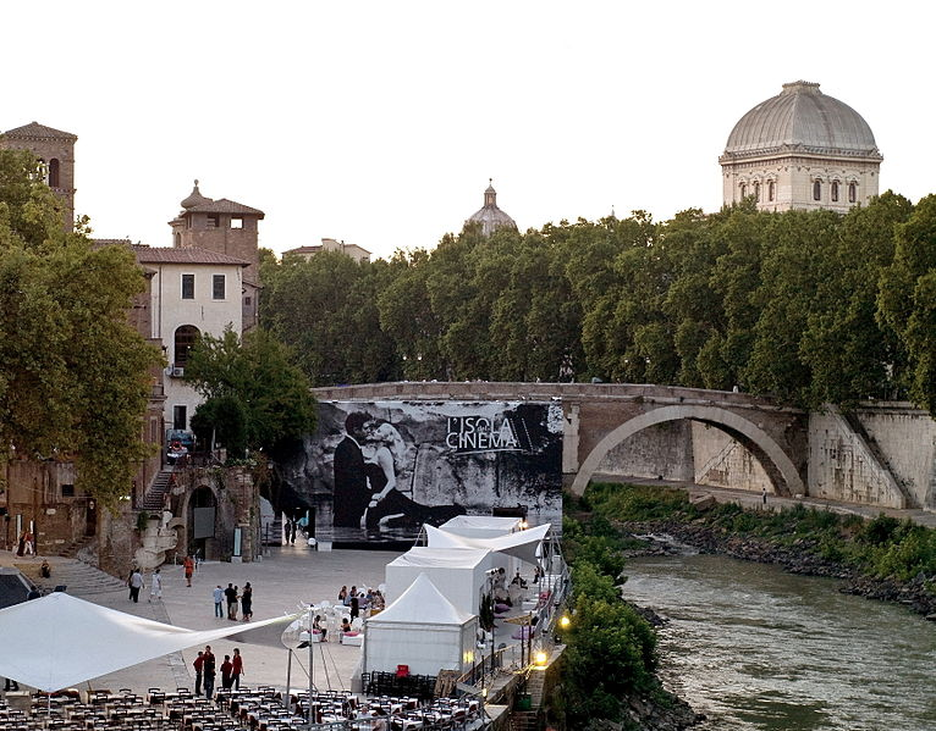 Summer festivals in Rome featuring food and craft kiosks, and outdoor cinema on the Tiber Island. Photo by Myrabella.
Early summer brings clear, sunny days with warm temperatures and many outdoor events, like the outdoor cinema above, plus the possibility for visits to the beach.

And, of course, Rome in the Fall which can be very much like the spring.  So, when to visit Rome?  Anytime!
Questions and coments